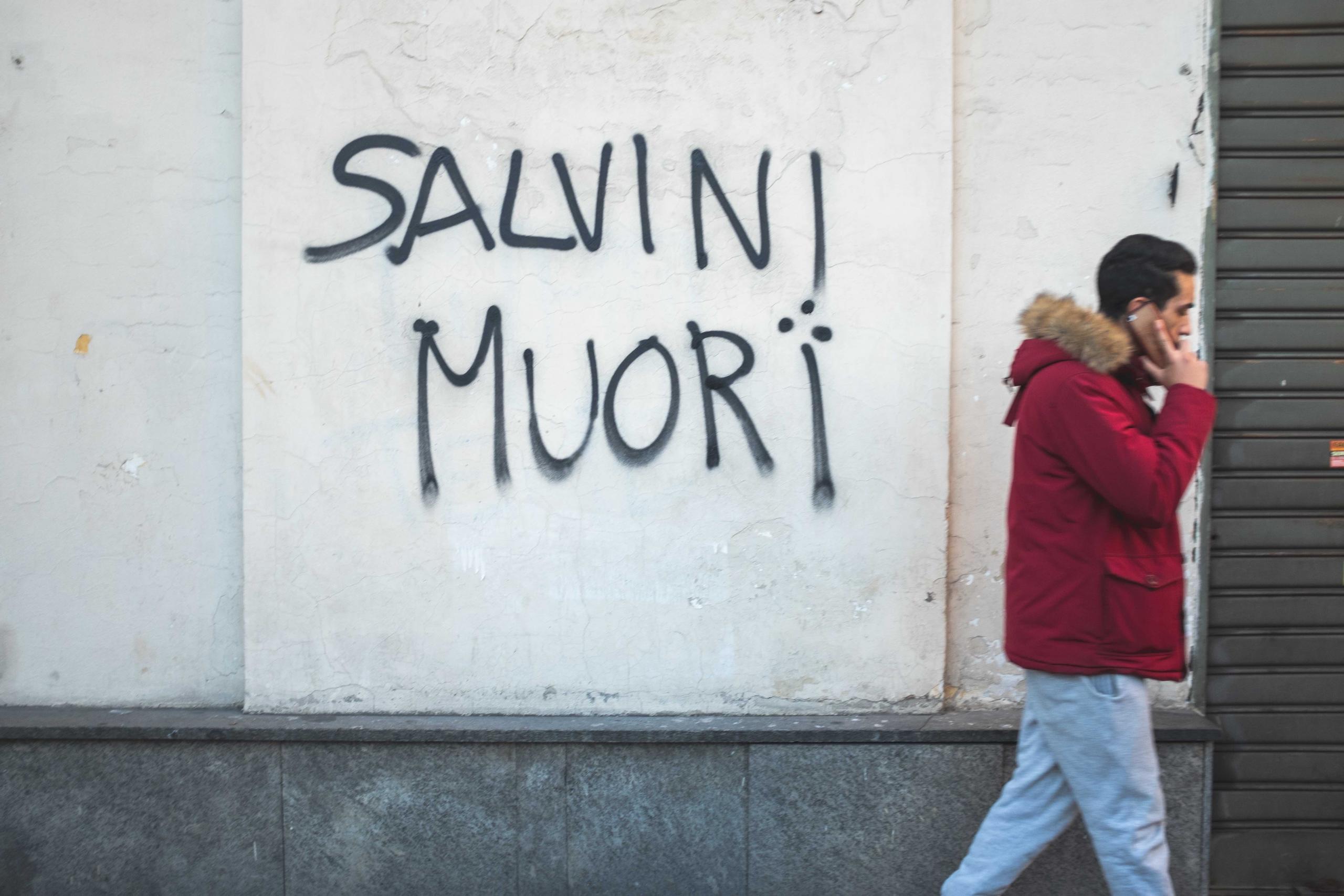 Matteo Salvini and the Italian Right

It had been his worst week in office. The press had started eating him alive. His coalition was showing signs of stress. And opposition was starting to coalesce around his refugee policy.

No amount of Nutella selfies and press briefings wearing cop jackets was going to change things. Matteo Salvini had gotten his point across and Italians were starting to say he’d gone too far.

But you can’t run a government on cruelty alone. As the fate of fascism makes plain, eventually it turns into an end unto itself, negating any pretence to a state that cares about its citizenry. Racism might come first, but it’s always a rehearsal for discriminating against everyone else.

The proof was in the pudding. Cinque Stelle Prime Minister Giuseppe Conte and co-Deputy Premier, Luigi Di Maio, had rebelled against Salvini’s zero migrants landing policy and secured the admission of refugees stranded on the German “NGO taxi”, as Di Maio had once put it, Sea Watch.

Not exactly known for their multiculturalism, it was clear the Movimento 5 Stelle leaders saw the stranded refugees as an opportunity to reinstate their declining leftist cred. If Matteo Salvini would leave them to die in the Mediterranean, there’s no doubt he’d leave Italians stranded, too.

That’s not to say the initiative was solely driven by self-interest. It was the right thing to do, and it was also a reflection of the substantial sympathy for migrants that continues to exist in Italy.

Hence, the welcome shown that same week to 50 more refugees, in Salvini’s own adopted home of Calabria, after disembarking from a ship off the coast. And that of the mayors and provincial governments from Sicily to Milan, that began filing legal challenges to the so-called Salvini decree, stripping refugees of their civil rights under international law.

There was nothing especially surprising about the pushback. The mayors of Rome and Turin, both strongholds of coalition partners the M5S, had made it plain they would not cooperate with the decree during the fall, and that migrants would continue to receive the same assistance as they did before.

It was the context in which the pushback was made, contradicting the alleged national consensus promoted by the deputy premier, as though his politics are Italy’s politics. Clearly, not everyone agrees with Matteo Salvini despite his relatively high poll ratings. He still has a limited mandate.

The dissent helped underline the concerns echoed in a New York Times profile of the far-right leader published around the same time, in which it alleged that his immense, three million following on Facebook might well have included purchased followers.

Few European leaders, with the exception of Salvini’s nemesis, beleaguered French President Emanuel Macron, built such an immense base of support so fast. Given his poll numbers and constant bragging about his popularity, it’s easy to believe that Matteo Salvini performed as well as Macron did in Italy’s March 2018 election.

The fact is, the deputy premier only garnered 19% of the vote — the exact same as the Matteo Renzi-led Partito Democratico. Not the 80% in Macron’s second and opponent-demolishing wipeout in the 2017 poll.

Like Salvini, Macron associated his electoral triumph with a new political sensibility, one which, in his case, was decidedly neoliberal and centrist. The French had decided to reject Marine Le Pen’s far-right extremism in favour of continuity, despite suffering from over a decade of high unemployment and sluggish to negative growth, particularly in the rural areas of the gilet jaunes.

Taking a cue from the French leader, since the formation of the Italian government, Matteo Salvini has simply gone about proclaiming himself to be Macron-in-reverse. Equally revolutionary, in short, but hailing from the racist Mussolini-worshipping far-right, Italy’s new political centre.

The regret of many

It was and remains a lie, of course, despite the fact that Salvini remains up to eight points ahead of his coalition partners, the M5S, in election polls. But, nonetheless, he continues to govern with the same mandate as the ostensibly eclipsed ex-governing party, the PD, who just as well might have formed a coalition with Cinque Stelle, but didn’t, to the regret of many.

A centre-left coalition would have made a lot more sense given the previous government’s slow but steady successes at managing Italy’s ongoing economic crisis. Originally an outgrowth of the PD (founder Beppe Grillo had wanted to be its leader) Movimento 5 Stelle would likely have rejuvenated the left side of the older party and made the exact same claims about representing the zeitgeist as Matteo Salvini claims to be doing today.

At the very least, such a tie-up would have represented a more rational and consistent cross-section of voters than that of the actually existing Lega-M5S coalition. The point is that the numbers behind the government would be no different, something which Salvini’s relentless campaigning and touting of his leadership mandate continually papers over.

If the deputy premier weren’t combining his boasting with persistent public appearances wearing police jackets, he wouldn’t appear so threatening. But, in tandem with his Mussolini quotations, and his cavorting with Nazi ultras, Matteo Salvini projects the image of a dictator, symbolically staging a coup against Italian democracy.

Italy is well-known for its democracy deficit. Salvini is not the first Italian leader to wage war on its minorities and the left. But he has taken the most explicit of licenses to identify with the country’s 20th century fascist past, dispensing with the lip service to liberal democracy and European integration paid by his predecessors, including electoral coalition partner Silvio Berlusconi.

So extreme are Salvini’s politics that he makes some Italians wistful for Il Cavaliere’s tenure, as though Berlusconi was somehow more liberal. Perhaps it was his buffoonery, and tabloid lifestyle, that blunted his racism, and the destruction he wrought on Italy’s economy. After all, he fucked Arab girls and owned football teams with black players, like the Jewish-raised Mario Balotelli.

The problem is that Silvio Berlusconi was still intensely xenophobic and his politically incorrect candour towards minorities, even Barack Obama (his repeated ‘suntan’ complement) — made it easy for someone like Matteo Salvini to normalise his racism. That the billionaire included actual fascist party members in his cabinet, openly praised Mussolini, and exonerated Italy’s role in the Holocaust was just Silvio being Silvio. Not a building block for making Italy more right-wing.

The effects would not be discernible until the 2018 election when, unable to compete for the premier’s job again, Berlusconi once again partnered with the Lega to run as partners in a centre-right bloc. Taking the advice of everyone on the Western far-right, including Steve Bannon and Marine Le Pen, Salvini eventually took over Berlusconi’s leadership role, copping his hate speech and brutal invective, leaning on social media instead of TV to build a similarly broad constituency.

Italians imbibe Matteo Salvini’s Facebook leadership just like they once looked to Silvio Berlusconi’s broadcast presence for guidance, whether it was the former premier, inveighing on immigration issues on his own news programs, or by consuming the retrograde tabloid programming of his lifestyle channels, promoting family values and boob jobs. The difference is that Salvini is more didactic, like he’s surgically attached to an Animal Farm-fed teleprompter.

Salvini is not the second coming of Berlusconi, though. Half his age, the deputy premier’s aggressive rhetoric betrays someone of astonishing self-assuredness, for whom taboo-breaking is not a concern. Berlusconi’s four terms in office, in which the Lega was his coalition partner, did it for him. Hence, when the deputy premier says he doesn’t care if he gets called a fascist or a racist, its because he grew up in a world in which such dispositions were mainstream.

This is what’s so dangerous about Matteo Salvini. He’s a second-generation far-right politician, building on an already established base of parties, like Berlusconi’s Forza Italia, which worked hard to integrate a fascist presence within the Italian right in the 1990s. While Salvini’s Lega wasn’t a consistently fascist party per se, its separatist politics — independence for a fictitious Italian north called Padania — have always been typical blood and soil fare, albeit regionalist.

For those who lived in Milan at the end of the final Berlusconi government, Lega posters were a noteworthy sight, featuring images of African-laden refugee ships, with the word “invasion” repeated ad infinitum. The 2009 EU election posters of Lega MEP Mario Borghezio were especially incendiary, repeatedly denouncing immigration and Islam. Matteo Salvini is just reiterating the same prejudices common to his party in that era. It’s nothing new, nor, a reflection of the refugee or economic crises Italy has weathered the last decade.

The only thing that’s changed is that the racist formula the Lega used to help build itself as a northern party is being employed nationwide, now that Salvini has abandoned his regionalism, and embraced Italy as a whole. As it turns out, the messaging sticks outside of its market-tested proving grounds. That it resonates inside a country with a political history like Italy is no great surprise, either. Berlusconi already schooled the rest of the country to accept its fascist past. All that was required was a politician who understands social media to take it to the next level.

Without a doubt, there will be other revolts against Matteo Salvini’s authority, led by his coalition partners and Italy’s governors and mayors. The point is to make them have longer-lasting and of greater immediate consequence, so that it becomes impossible for far-right politicians like him to stay in power for any length of time. Italy is too fragile a country to be governed by politicians who care more about governing than they care about the actual people who live in it.

Not only are the numbers there for equally representative coalitions to democratically take office. There are also vast numbers of persons within Italy’s borders who cannot vote in elections, whose lives depend on more enlightened national leaders. The most profound rebellion that could come out of the Salvini era would be to instil in Italians the idea that refugees are a permanent part of their country, and that governments which refuse responsibility for them should not be in power.